Lightroom 4, where have you been all my life!

Lets start with a bit of history.

Since purchasing my first DSLR, a Canon 350D, I had always used the ZoomBrowser software that came with it to "organise" my library on my Windows PC. It did the job fairly well at the time, but I needed Photoshop to do all my post-processing. When I bought a 5D classic, I continued to use ZB and Photoshop for a number of years. When I came into a little bit of money, I decided I wanted a 7D to replace the 350D. Guess what? ZB ran like a three legged dog, presumably because of the increase in file size. Therefore I had to find a different piece of software. A number of people recommended using Faststone Image Viewer. This made viewing images better but I still needed ZB to actually organise what I was uploading.

I then made the massive decision when I received some inheritance that I would switch to a Mac, something I had wanted to do for a number of years. A 27" iMac soon arrived and I was amazed at the performance and quality. I straight away decided to use Aperture as my organiser. This tool also allowed me to make adjustments without the need for Photoshop, although for some of the more complicated tasks, PS was still required. I'll say at this point that when I changed to the Mac I had to pretty much re-process all of my images on my website. I appeared that I had massively over-processed all my shots because of a cheap and poorly calibrated monitor.

In February of this year, I join The Societies to try and help me turn my hobby into a career, specifically Nature & Wildlife and Travel & Tourism. As part of being a member, they provide a service where you can submit a number of images for critique. I selected 20 "Travel" images from last years trip to Canada. I waited a couple of weeks and received a report back. To say I was at first devastated was an understatement. Several of the reviewers had described my images as below average with poor post-processing. After the initial shock, I took the comments on board and realised I needed to improve my taking of images and post-processing.

By sheer luck, I received an email from Adobe, telling me I could download a trial of the new Lightroom 4 software. I had always seen many posts on forums with regards to LR but never actually used it. I took the plunge and downloaded a 30 day trial. Immediately, I saw flaws in my organisation of files and also an improvement in my post-processing. I was only messing about and needed to know more. Another stroke of sheer luck, Dave Wall was doing a seminar on LR4 in Cannock, which is only 40 minutes up the M6. I immediately booked myself on the seminar.

On a rainy morning, I headed up the motorway and met up with Dave, along with Katie from The Societies who I had previously met a couple of times, and a number of other members. In a packed day, Dave discussed many subjects, one of which I will discuss in another post, to do with organising files. I learned a massive amount about the Library and Develop modules, taking down a huge amount of notes. Thanks very much Dave, it was a brilliant day.

I raced home and purchased a full copy of LR4, which was currently reduced to £99, a bargain. Also, following some of Dave's recommendations, I purchased two Firewire 800 Hard Drive Docks, again I will detail in another post, and two 2TB hard drives. I already have a Netgear NAS box in the office but Dave's solution appeared to work better.

After coming back off holiday from Spain, I spent the next week re-organising my files onto the new drive setup and importing into LR. I now had a perfectly organised library, which is easy to add to when I create new projects.

Some of the features of LR Library module I love are:

Collections, a great way of creating "playlists" of images, leaving the originals where they are, so any changes made will appear in the collection too.

Keywords and Metadata. Keyword addition and metadata changes are simple and can be done individually or en-masse. And LR remembers keywords too so I don't have to re-key every time.

Published Services. These are brilliant, and when used in conjunction with Collections, make it so simple to upload images, in my case to my Zenfolio website,  Facebook and Flickr. 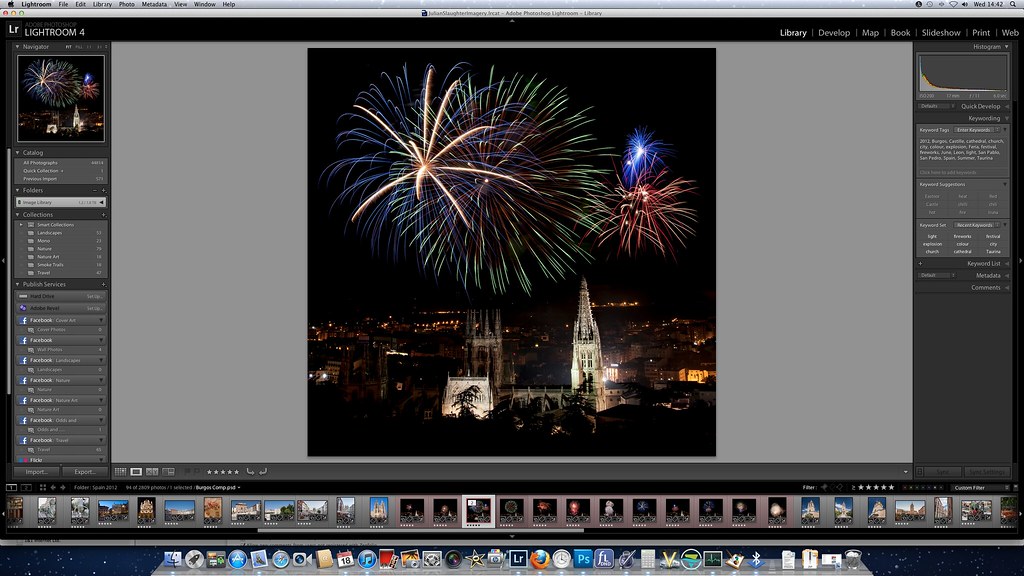 On the the Develop module. The Develop module is based on sliders similar to the Adobe Camera RAW software. I feel however that LR processes images much better than ACR.

The Highlights and Shadows sliders are brilliant when used on RAW files from recovering any blown highlights or areas of shadow that are entirely black.

All the standard controls you would expect are there and make life very easy for post-processing. There are a number of sections that allow you to change things like the Tone Curve (Curves to PS users), HSL (Hue, Saturation, Luminance) which is brilliant, I'll come back to it later, Detail which includes Sharpening and Noise Removal, which I have to say is better than some of the third party noise removal tools I have used, and Lens Corrections, which does an excellent job of sorting out any lens issues such as vignetting and distortion caused by wide angle lenses.

So back to HSL. As well as the standard sliders for the various colours, Dave showed us how to use the Targeted Adjustment Tool. If you look closely on the HSL module, there is a little icon in the top left had corner of the screen. When you click on it, it changed your pointer and the allows you to SELECTIVELY ADJUST THE HUE, SATURATION OR LUMINANCE OF ANY PART OF THE IMAGE. I'm sorry, I'm getting excited. So for example, you have taken a shot of a beach with a pale blue sky. Lets say you want to increase the blueness, so click of the TAT, point to an area of the sky and drag the cursor down to increase sats or up to desaturate. Because you have selectively selected a tiny pixel of blue, you are only adjusting the blue in the image. Do the same on the sand and you are just amending the yellow or orange. With two quick drags you have selectively increased the saturation of the image rather than doing a global change (which you can do in the Basic module). You can do the same with Hue, changing colours easily, and luminance allows you to change the brightness of a colour. Its a brilliant tool, try it.

As well as the Crop, Spot Removal and Red Eye Removal tools, which are all excellent at doing what they do, the two other tools I have used a lot are the Gradient Tool and the Brush Adjustment Tool.

The Gradient Tool lets you create, you guessed it, graduations in your images, to a very fine detail, and not just with exposure but virtually all of the other adjustments too.

However, my favourite tool has to be the Brush Adjustment Tool. It does exactly what is says on the tin. You can make very fine adjustments to small parts of an image, again with all the standard adjustments like exposure, contrast, saturation, shadows, highlights, clarity, sharpness but also, and this can be the killer for very tricky lighting situations, you can adjust the WHITE BALANCE on selective parts of the image.

With these tools to hand, I feel my post-processing has improved massively, unless someone tells me otherwise. There are a couple of things I still need PS for, like cloning, but I can live with that. If you have not used LR before, I can highly recommend using it. 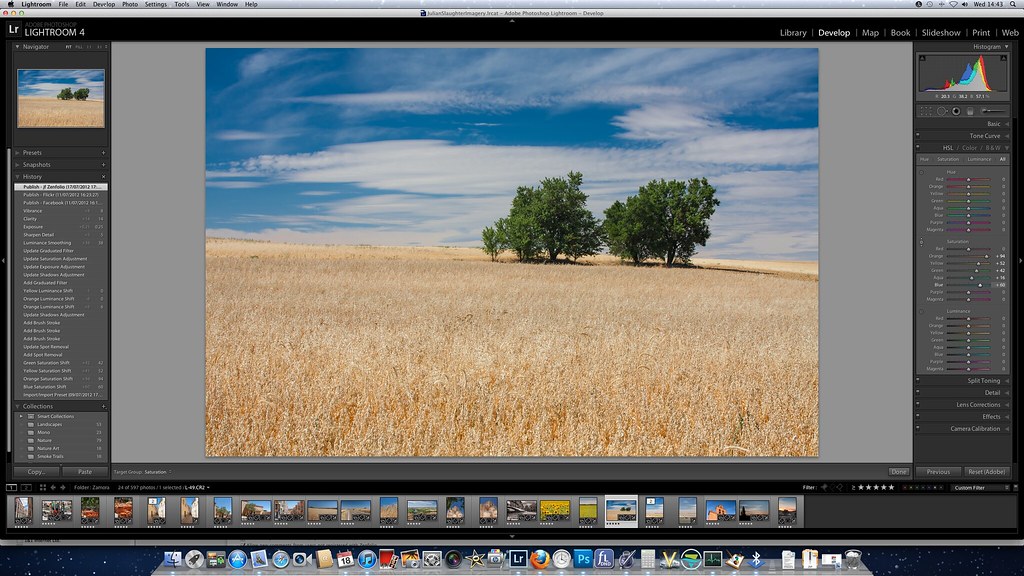 There are a couple of other modules which may be of use to some. If your camera has geo-tagging, the Map module will show you where abouts in the world the image was taken. I have tried this with our Sony HX9V and it works a treat. LR4 has a Book module, which links to Blurb, so if making photo books is your thing, you can now do it all within LR. There are also Slideshow, Print and Web modules but I have not used these at this stage.

To summarise then, Lightroom 4 has had a massive impact on my workflow and post-processing. I can highly recommend it to anyone who is looking to set up their library or to those already using another tool.